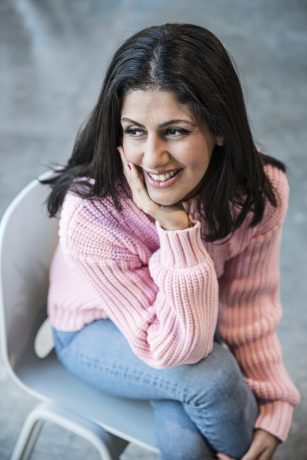 ‘It’s a cliché, but there is an impossibility at the heart of translation’

Ahead of our exciting online event ‘European Writers on War and Conflict‘, Swedish author Golnaz Hashemzadeh Bonde spoke with translator, poet and editor Elizabeth Clark Wessel about the process of writing and translating What We Owe: a haunting and emotional tale of survival set in Iran and Sweden.

Golnaz Hashemzadeh Bonde (GHB): How did you come to translate What We Owe?

Elizabeth Clark Wessel (ECW): I was brought onto the project by Golnaz’s agent, Astri Von Arbin Ahlander, who is a writer and translator in her own right. As soon as I read it, I knew it was the kind of book I wanted to be translating – aesthetically interesting, emotionally powerful, and also politically relevant.

ECW: What motivated you to write What We Owe?

GHB: What We Owe was not a deliberate act. Nahid’s voice came to me with force, and she urged me to tell her story. Almost a subconscious process. On the conscious side, I had lost both my parents to illness. They were both in their early fifties when they died, and with them being refugees of war and persecution I needed to dig into their past. What had they lost? What had they gained? What was it that killed them, as I am certain that their illnesses were connected to the traumas they’d endured. Writing What We Owe was like having a final conversation with them. Listening in detail to their stories, their fate, in order to understand. In order to bear witness. In order to tell it to others, especially to the future generation, to my children who will never know their grandparents but whose lives are built on their sacrifices.

‘Nahid’s voice came to me with force, and she urged me to tell her story. Almost a subconscious process.’

GHB: How did you approach the translation, what were the challenges?

ECW: The novel is driven by its protagonist’s voice. The character of Nahid is so real, so complex, and the content of her story so heavy that it was important for me to feel like I had the sound of her particular voice in my head as I was translating. She can be difficult, some of her actions could make the reader uncomfortable (for example, in her relationship with her daughter), but as the ‘author’ of her own story these facts are presented in ways that are self-aware and even charming. I tried to inhabit and re-create that complexity on the page through voice. It felt as if a balance had to be struck and maintained.

Another challenge included deciding what register/type of English could best capture the transnational context of the novel. I remember there was a discussion of the word ‘mom’ vs. ‘mama.’ Did ‘mom’ make the book sound too American, were my personal connotations with ‘mama’ – as someone who grew up in the Midwest of the US – relevant to a novel that would be read by many different English speakers? In the end, we went with ‘mama,’ and reading it now I’m very happy about that. It feels right for the book and its story.

ECW: How did it feel to be translated? What did you notice?

GHB: I think you captured Nahid’s nature so well. English speakers have reacted to her with the exact nuance I hoped for, which is a hard thing I think in this kind of writing. What We Owe is so very spare, and every word carries so much meaning.

To me, as the writer, the tricky thing is recognizing the rhythm of the story in a different language. I hear a melody in my head when I write, and each word is a building block in that melody. In a different language, the words are of course different and they create a different tune. So, although the meaning is correct, and the nuances are so well captured, I never feel that I’m reading my own writing. But once the book has travelled this far, it’s no longer mine in that personal sense. It belongs to each language, and each reader.

‘I hear a melody in my head when I write, and each word is a building block in that melody’

GHB: Was there anything you found impossible to translate?

ECW: It’s a cliché, but there is an impossibility at the heart of translation. The beauty of the rhythm in the Swedish text is, of course, something that is quite unique to the original. Still I think as a translator you have to ignore failures and impossibilities and focus instead on what you can do, which is obviously a lot. Ultimately, I know that this book has resonated deeply with so many readers (as it did with me), and I’m proud to have been a part of bringing such a powerful piece of literature to a wider audience.

Golnaz Hashemzadeh Bonde is the author of two books in Swedish, Hon är inte jag (She’s Not Me) and Det var vi (What We Owe). What We Owe, translated into English by Elizabeth Clark Wessel and published by Fleet, was the winner of the Dayton Literary Peace Prize in Fiction in 2019. The book offers a complex and diverse image of refugees and explores how identity is passed on from generation to generation.

Elizabeth Clark Wessel is the translator and co-translator of numerous novels, memoirs, and other projects from the Swedish, including Astroecology by Johannes Heldén, Let’s Hope for the Best by Carolina Setterwall, and the journals of Hilma af Klint in Hilma af Klint: Notes and Methods, edited by Christine Burgin. She’s also a poet and a founding editor at the independent poetry press Argos Books. Originally from rural Nebraska, she spent many years living in New York and Connecticut, and these days she calls Stockholm, Sweden home.

This conversation was commissioned by the National Centre for Writing and EUNIC London. Golnaz Hashemzadeh Bonde will be appearing at our free online event on Tuesday 6 October 2020 – ‘European Writers on War and Conflict’. Find out more >>