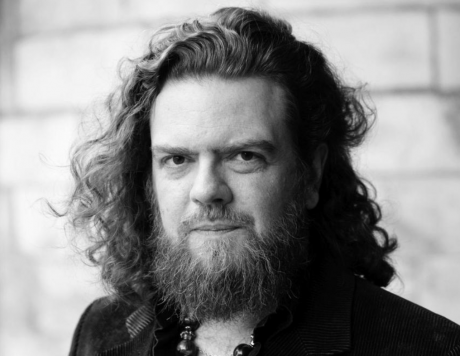 Ahead of our exciting online event ‘European Writers on War and Conflict‘, Flemish author and playwright Jeroen Olyslaegers spoke to writer, editor and translator David Colmer about the process of writing and translating Will: an award-winning lyrical meditation on evil and guilt set during the Second World War.

David Colmer (DC): Jeroen, on first reading your book, one of the things that struck me about it and made me want to translate it was the power of its depiction of the way fascism can spread through society and quickly take over when circumstances allow. That seemed like a very timely warning. What made you reach for that subject?

Jeroen Olyslaegers (JC): Writers don’t find stories to tell. It’s the other way round. Stories are always on the look-out for someone suitable to write them. It was never my intention to write a Second World War novel. Bookshops and libraries are filled with those stories already. Every time a new one comes out I hear readers groan: Not again! I hated all that stuff. You see, my grandfather was a collaborator during the Nazi Occupation of Belgium. Most of those men have kept silent about what they did. My grandfather was quite the opposite: he could not keep his mouth shut about it. Hours and hours of stories told at the kitchen table marked my youth. It seemed that my grandfather never moved on from 1947, the year he got out of prison after the war. He was angry, called himself an ‘idealist’. One evening he got me drunk on cognac and told me some horrible stuff. I was fifteen. In the morning I could not remember exactly what it was he had told me. My first hangover was one of blurred memory and shame. Don’t hate him for it. I never did. But enough was enough. Basta.

Then, one day a couple of years ago, I receive an invitation from a remarkable history professor called Herman van Goethem. He’s gathered together a group of non-experts like me to discuss a special document. It’s a police report, written by a policeman during the summer of 1942. It describes a round-up of Jews, organized by the Germans, with the participation of the Antwerp police force. It blows my mind. Why? We ask ourselves that day. Why would someone implicate himself in one of the darkest deeds ever done in this town? The police report is full of descriptions of terrible violence. During the horrific mayhem of the round-up, the policeman and his colleague knock on a door in the Kruikstraat. A Jewish man opens the door and cuts his throat with a razor right in front of them. Inside they find the rest of the family, poisoned at the kitchen table…‘

On that day a story came looking for me. It knocked twice on my door.’

Here’s the thing. I live on the Kruikstraat. After returning from the professor’s gathering I stand at the window of my upstairs writing room. It offers a good view of the house that was described in the police report. I cannot look away. I see the scene. I see the ghosts. I see normal life, more than seventy years later, suddenly saturated with indifference to what happened. The phone rings.

It’s my Mum. I tell her I have to write this story. I have to explore what happened in the policeman’s head, what really happened during this dark period, how people kept on living normal lives or tried to. Her voice suddenly brings back a vague memory. I look to my right, to where Van den Nestlei cuts across the end of my street.  Didn’t we have a relative living there during the war? I suddenly ask.  Yes, your aunt, my Mum says. She used to work as a maid for this posh Jewish family. Not after August 15th 1942, I reply. They were all rounded up on that day, packed into trucks and sent off to Auschwitz to be killed. My Mum hesitates. She kept on living there, she says feebly, with an SS officer apparently… On that day a story came looking for me. It knocked twice on my door. That’s the reason why I wrote this book. Stories couldn’t care less whether bookshops are filled with war novels. They want to get told. It’s as simple as that.

JC: From my perspective, an English translation of my work must have been a difficult job. A lot of tough decisions had to be made on the level of language and idiom. How did your translation come about? And what is particularly challenging to the Flemish/Antwerp idiom that I use?

DC: The Dutch publisher was very enthusiastic about the book and saw that it had a lot of international potential, but the sample translation they commissioned didn’t really capture the colourful, earthy voice, so when presenting it, the rights manager added the proviso that the sample wasn’t stylistically representative and the book would need a translator with a proven record with comparable styles and even said ‘like David Colmer’ – probably because of my translations of Dimitri Verhulst’s novels. Of course, nobody can be more like me than I am, so before bidding for the rights, an English publisher who didn’t want to run the risk of buying the book but not being able to secure a suitable translator asked me if I would be willing to translate it. I read the book, loved it, did a little test sample of my own to see if I could find the right tone, and then one thing led to another.

‘Regional variations in usage are one of the greatest difficulties of literary translation.’

Regional variations in usage are one of the greatest difficulties of literary translation. When is it relevant to represent them and when are they simply part of the setting? Which parts of the voice do I as a reader find colourful because I happen to have learnt my Dutch in Amsterdam and not Antwerp? In Will, I wanted to capture a colloquial, exuberant voice that has something of the streets – with aggression, humour and inventiveness – but also a dated quality that makes it appropriate to the period. I tried to do that by using generic, slightly old-fashioned British working-class words and terms that weren’t tied to any specific city and combining them with an expansiveness that the people who use them might not usually have. If we have enough space to give an example, the opening passage, which I translated when first asked about doing the book, is as good as any:

A sudden snowfall. It reminds me of the war. Not because of the cold or some other inconvenience, but because of the silence that takes hold of the city. It’s coming down thick and steady now. It’s night. I hear the sounds congealing into a dull nothing. And then someone like me has to go out, no matter how old he is. I know, son, everybody thinks: He’s going to slip and break his hip. Soon he’ll be lying in a hospital bed at St Vincent’s with his legs up in the air. And that’ll be the end of him, laid low at last by the kind of bug they cultivate in hospitals. It’s odd how the elderly get infected by other people’s fear. The fear that makes them consent to being cooped up in homes, letting themselves be fed codswallop and cold porridge, going along with oh-bugger-off bingo nights and submitting to a Moroccan assistant nurse with an arsewipe in her hand. They can keep their fear. I’ve never been afraid, not really, and nobody’s going to teach this clapped-out old dog new tricks.

Jeroen Olyslaegers writes columns, plays and prose, including six novels. In 2014 he was awarded the Arkprijs van het Vrije Woord for his work and his social engagement. His international breakthrough came with the novel Will, an award-winning lyrical meditation on evil and guilt. This ambitious and multifaceted novel, translated into English by David Colmer and published by Pushkin Press, focuses on some dark pages of Belgian history.

David Colmer is an Australian writer, editor and translator, mainly of Dutch-language literature. He translates in a range of genres and has won many prizes, including the IMPAC Dublin Literary Award and the Independent Foreign Fiction Prize (both with novelist Gerbrand Bakker.) Recent translations include the poetry pamphlet Beautiful Things: In Memory of Menno Wigman (Arc Publications) and Eddy de Wind’s 1946 memoir Last Stop Auschwitz (Doubleday).

This conversation was commissioned by the National Centre for Writing and EUNIC London. Jeroen Olyslaegers will be appearing at our free online event on Tuesday 6 October 2020 – ‘European Writers on War and Conflict’. Find out more >>