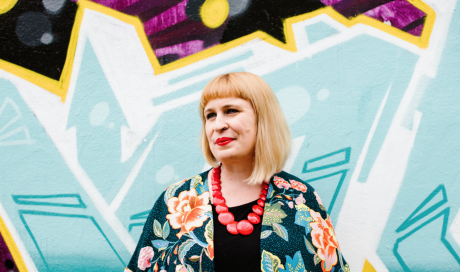 Ahead of our exciting online event ‘European Writers on War and Conflict‘, award-winning writer Jan Carson spoke to translator Clara Ministral about the process of translating The Fire Starters – a story which examines the legacy of violence in Belfast, Northern Ireland – for a Spanish-speaking audience.

One of the best things to come out of winning the EU Prize for Literature for Ireland in 2019 has been the opportunity to meet and share ideas and learning with writers from a wide range of different European countries. Having grown up in Northern Ireland during the period of the Troubles I’ve found it particularly humbling and beneficial to spend time hearing the stories of other writers who’ve experienced conflict and post-conflict situations. These interactions are often very emotional, honest and full of the kind of learning which I believe is essential if we are to continue moving towards peace and reconciliation within our separate communities and across Europe as a whole. As we here in the UK contemplate Brexit and all its implications I am determined to do my best as a writer and a European citizen to maintain these friendships and ensure these important conversations continue to be had. As such, I am grateful for the opportunity to be in conversation with three amazing European writers as part of the Meet the World series. I look forward to talking about how they address the subject of war and conflict in their writing and trust that I will leave our conversation a little changed by the stories they share.

I am also thankful for the inter-European connections I’ve made through having my work translated into various European languages. The Fire Starters is set to be translated into around a dozen different European languages with the first two of these translations already published: the Italian edition, L’incendiario published by Giulio Perrone Editore, and the Spanish language edition Los Incediarios published by Hoja de Lata Editorial and translated by Clara Ministral. As a writer it was a really humbling and exciting process to watch my words filter through someone else’s mind and see how not only words but also ideas, cultural practices and humour translates in a very different setting. The Fire Starters is so grounded in a very specific part of Northern Ireland, I was intrigued by how it would translate in a different country with readers who may or may not have previous experience of our cultural and political backdrop. I don’t mind admitting I got a real kick out of imagining people in Madrid, Rome and Zagreb picking up the book and trying to picture what life on the Beersbridge Road or around the Shipyards might be like.

The process of working with translators has been an absolute revelation to me. I’ve been lucky enough to work very closely with the amazing Clara Ministral. There were emails. There were long chats over coffee. There were several hilarious attempts to pin down Belfast euphemisms and I’m grateful to have emerged from this process with not only a fantastic translation but a wonderful new friend. Clara went above and beyond in her work on The Fire Starters, championing the book from the very first read and working to secure a Spanish publisher. She’s been good enough to answer a few questions about the process of translating The Fire Starters below. I can’t recommend her highly enough. I only wish my Spanish was good enough to properly appreciate her hard work.

There are so many different people who conspire to support the work and careers of writers. I’m constantly overwhelmed by the huge crowd of journalists, academics, booksellers, festivals and literary organisations who’ve gone out of their way to help and promote my writing. I’m now adding translators to my list of favourite bookish people. The act of translating is a supremely creative act and I’m only just beginning to understand this. It is an incredibly generous thing to spend so much time and effort striving to capture the essence of someone else’s art and render it in a way which will captivate readers in a different language. It’s a constant juggling act between meaning, aesthetics and that indefinable thing which makes a sentence sing and I am grateful to have worked with some fantastic translators on this book. I trust their words are serving my words incredibly well as The Fire Starters goes off to find a host of new European readers. Thanks to everyone who has worked and is working on this book. It’s been a wonderful journey so far.

‘The Fire Starters is so grounded in a very specific part of Northern Ireland, I was intrigued by how it would translate in a different country’

Jan Carson (JC): What drew you to The Fire Starters as a book you’d like to translate?

Clara Ministral (CM): So many things! Initially, I think it was the fact that it was set in present-day Belfast. I am very interested in memory and in how societies deal with difficult and traumatic pasts, the different ways in which those pasts manifest themselves in the present and what younger generations do with this history that they inherit from their parents and grandparents, so it was great to come across a book that deals with all those things (and many others) in such a subtle, shrewd and moving way. I also love translating books with a strong sense of place because I get to spend time in a foreign land without leaving my desk. Belfast is a place I would love to spend more time in one day, but in the meantime, translating The Fire Starters was a great way to walk its streets and be surrounded by its people for a few months. Jonathan and Sammy also felt like two characters I would love to spend some time with for a while, they’re so rich and rounded. I knew I would have a lot of fun translating some of Jonathan’s scenes (he is quite a tragic character in some ways, but he really cracks me up). Last but not least, since the moment I started reading the novel I was in awe of the writing and the creative use of language and thought it would be a stimulating and exciting project to undertake.

JC: What were the main challenges in translating The Fire Starters?

CM: One thing that kept me awake at night was to do with cultural references. I sometimes felt that, in order to understand some of the references in the novel, the reader needs some previous knowledge of Northern Ireland that many Spanish-speaking people might not necessarily have, and I was worried that some of the more obscure ones would be too impenetrable for them. So, I had to find the right balance between helping the reader a little bit here and there but also not explaining too much. In order to determine when that little help might be needed, I found myself doing quite a few informal surveys among Spanish friends and relatives along the lines of, ‘Do you understand what I mean if I say that a group of women in a certain area of Belfast are “orange in both hue and political outlook”?’ It turns out many Spanish people only really picture a particular US president’s face when they think of orange and politics!

The main challenge, however, was more strictly linguistic. I haven’t had a huge amount of exposure to ‘Belfast English’ in my life and there were quite a few words and phrases in the book I had never come across before. The tricky thing sometimes was to figure out whether a particular phrase that sounded very exotic to me was a case of Jan being creative and playful with language (she also does this in fascinating – though also quite challenging – ways) or if it was just a standard phrase everybody uses in Northern Ireland. Luckily I had great help from Jan herself, from a couple of friends from Belfast and from some great online resources (to the people who’ve recorded videos of themselves shouting ‘Yeooo!’ and uploaded them on YouTube: thank you).

JC: What is your favourite thing about being a translator?

CM: One of the things I like the most is the way in which I as a translator get to read books. I partly became a literary translator because I loved reading, but I hadn’t even realised at the time that the way you read when you translate is unlike any other reading experience you might ever have. There are quite a few books I have read several times and that I would be inclined to say I know well. I have read books for various academic and professional purposes, such as reviewing, editing, publicising, teaching and even acting, and after each of those experiences I’ve normally been happy to conclude, ‘OK, I know and understand this text pretty well’. And yet none of these things come even close to the experience of reading a book that you are translating. The way you get to know the text, the degree of intimacy you develop with it, the way you notice the million little things that the words are doing (many of which I would never notice if I wasn’t translating it, no matter how many times I read it), the way you appreciate features of the author’s style that no one else would notice… It all makes for a totally unique experience and I get a lot of pleasure from it.

Jan Carson is a writer and community arts facilitator based in East Belfast, Northern Ireland. Her debut novel Malcolm Orange Disappears and short story collection, Children’s Children, were published by Liberties Press, Dublin. A micro-fiction collection, Postcard Stories was published by the Emma Press in 2017. Jan’s novel The Fire Starters was published by Doubleday in April 2019 and subsequently won the EU Prize for Literature for Ireland 2019. She has been shortlisted for the Sean O’Faolain Short Story Prize and in 2016 won the Harper’s Bazaar Short Story Prize.

Clara Ministral (Madrid, 1984) has a degree in Translation and Interpretation and in Theory of Literature and Comparative Literature. She lives between Madrid and London and, in addition to being a translator, she has been a bookseller, editor and cultural manager in different organizations. She has translated around twenty books of various genres and currently combines literary translation with other types of translation and with the completion of a master’s degree in Social Memory and Human Rights. Website

This conversation was commissioned by the National Centre for Writing and EUNIC London. Golnaz Hashemzadeh Bonde will be appearing at our free online event on Tuesday 6 October 2020 – ‘European Writers on War and Conflict’. Find out more >>