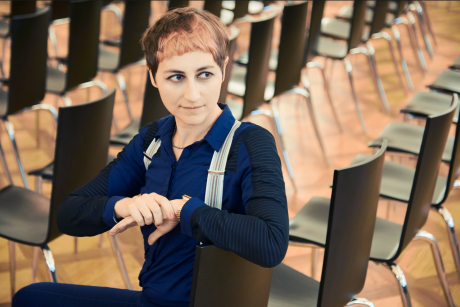 Ulrike Almut Sandig was born in Großenhain (GDR) in 1979 and now lives with her family in Berlin. She started publishing her poetry by pasting poems onto lamp posts in Leipzig and spreading them on flyers and free post cards. After completing her Magister in Religious Studies and Modern Indology, she subsequently graduated from the German Creative Writing Program Leipzig. Two prose books, three pop music albums, radio pieces and four volumes of her poetry have been published to date. For her performances she works with composers and performance artists, such as Hinemoana Baker (New Zealand), Alif (India) and Grigory Semenchuk (Ukraine). In 2015 Ugly Duckling Press (USA) launched a selection of her early poems in Bradley Schmidt’s translation. In 2016 Karen Leeder’s stunning translation of Sandig’s Thick of It (Seagull Books, 2018) won the
English PEN translation Pitch and has been awarded with an PEN
America/Heim Translation Fund Grant. In 2018 Sandig and Grigory
Semenchuk aka Poetry-Band Landschaft published their debut album with Schöffling & Co (Berlin). Hurst Street Press (UK) launched a cycle from Sandig’s poetry collection in Karen Leeder’s translation: Grimm reanimates the dark side of The Children’s and Household Tales of the Brothers Grimm and uses it as a backdrop for contemporary European concerns: war, migration, the rise of the Right. In 2020, Seagull Books published Sandig’s latest volume of poetry, also in Karen Leeder’s translation: I Am a Field Full
of Rapeseed, Give Cover to Deer and Shine Like Thirteen Oil Paintings Laid One on Top of theOther. Ulrike Almut Sandig is a member of the German PEN section.