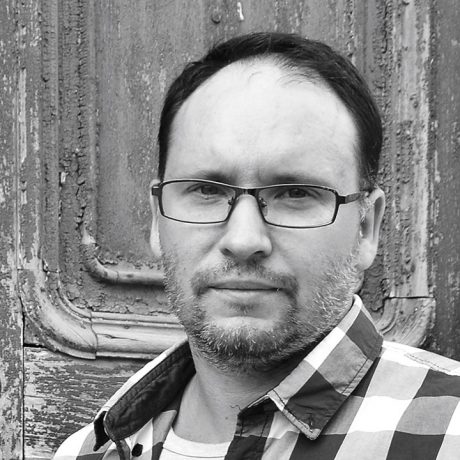 ANDREI IVANOV(b. 24/12/1971) sees himself as part of the Russian literary tradition, but identifies with Estonia as his home country and his creative point of departure. He graduated from Tallinn pedagogical university as a Russian philologist, lived in Denmark in a hippy commune, travelled elsewhere in Scandinavia, and he writes in Russian. His novels A Handful of Dust (2011) and Hanuman’s Travels (2009) recount his experiences in Scandinavia.

Ivanov’s most well-known book to date Hanuman’s Travels has been shortlisted to Russian Booker Prize (2012) and won the Prize of Cultural Endowment of Estonia. The novel has been translated into Estonian (2012), German (2012), French (2016) and English (2018).It is a picaresque novel, about a Russian from Tallinn who is a wanted man and his companion in fortune who is named after a monkey god, and their adventures in Denmark and its refugee camps, in constant fear of capture.

His novel Harbin Moths(2013) is a sweeping historical oeuvre which won the prestigious literary prize NOS in Russia and was also shortlisted for the Russian Booker Prize. In the novel, Ivanov delves into Estonia’s interwar history; more specifically, into the lives of the local Russian intelligentsia and members of the Russian Fascist Party. It covers roughly twenty years, starting with the exodus of refugees from Russia in 1919 and throughout the 1920s, and ending with Soviet expansion in the Baltic states in 1940. His latest novel, Living in a Funny Cemetery(2018) can be read as a sequence to the above.

Andrei Ivanov has also published novellas and stories. He has been a member of the Estonian Writer’s Union since 2013.