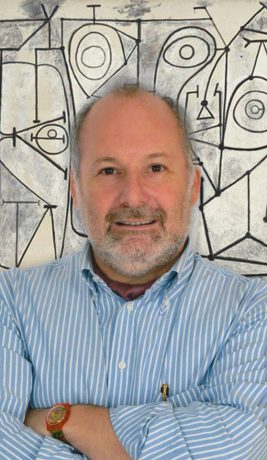 Antonis D. Skiathas studied Chemical Engineering. Nowadays he lives and works in Patras, Greece. He is a poet, anthologist of poems and literary critic. Antonis Skiathas has published 10 poetic books: Border Cemetery (1983), The horse of the waves(1990), The horse of the waves – Border Cemetery (1992), Summer Windsock(1993), Fantasies of a Walker (1996), Hail, Century (2002), Traces of people(2006), Poems – Summary (2006), Spring Eros Anniversary (2008), Hospitable City(2010), Evgenía (2016). Poems of him have been included in Greek and internatio- nal anthologies, and have been translated into 11 languages. His articles and essays on poetry and history have been published in journals and newspapers. He was co– director of the literary journal Ελί–τροχος during the ’90s. He is a member of the Greek Society of Writers and the Poets’ Circle. He founded and is the administrator of the cultural action “Grafeíon Poiíseos”.