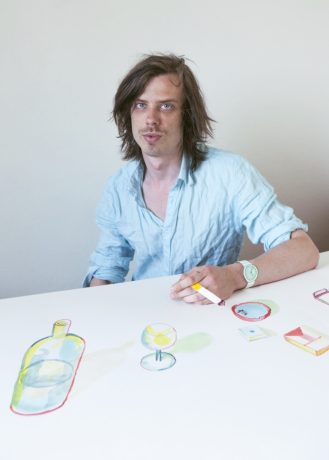 His debut comic book, A Delivery from Outer Space, was released in 2005. The slightly melodramaticVincent was released in 2006, followed in 2007 by a little nocturnal fantasy called Night Animals.
The Wrong Place (2009) started out as a graduation project and was a departure from the more typical comic art of his earlier books. It won the Haarlem Comic Festival’s Willy Vandersteen Award for best Dutch-language graphic novel, and an award at the Angouleme International Comics Festival. Since then Evens has stood out for the style so typical of his work: he doesn’t use contour lines or
balloons for text, but paints exuberant scenes and familiar dialogues in sequence, using an overwhelming colour palette. Evens surprises readers with each new book, and with each new page.
He followed The Wrong Place up with The Making Of (2012) and the many-year-end-best-of-list appearing Panther (2016). The City of Belgium will appear in March 2021.

Evens lives in Paris in a charming and oh so Parisian garret apartment.