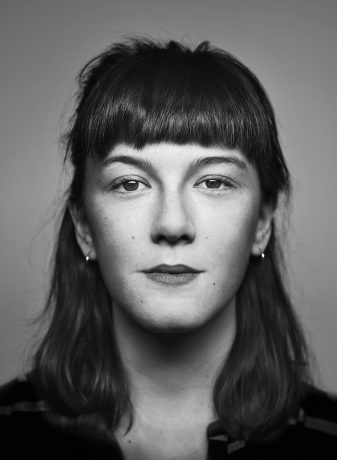 Charlotte Van den Broeck (b. 1991) holds an MA in English-German language and literature and is now studying Verbal Arts at the Antwerp conservatory. She twice reached the top 100 of the Turing National Poetry Prize and published in Het Liegend Konijn, Das Mag, De Revisorand DW B. She is already a household name as a performance poet. In 2015, on the advent of her debut volume ‘Kameleon’ (Chameleon), she was added to the line-up of the Saint Amour tour through Belgium and the Netherlands. In 2016 together with Arnon Grunberg she opened the Frankfurter Buchmesse where Flanders and The Netherlands were Guest of Honour in a very impressive way. In 2017 her second collection ‘Nachtroer ‘(Night Stirring) was published. At the end of 2019 her first book of prose saw the light to much critical acclaim. In thirteen chapters Bold Venturestells the stories of architects that committed suicide inside or because of the building they established. In these stories Charlotte Van den Broeck also reflects on the meaning of failure and the development of her own writing. On 30 January 2020 her poetry essay Cosmos, Texaco, illustrated by Ward Zwart, will be presented during the opening show of ¨Poetry Week. In the meantime, her poems are translated in several languages and the English translation of her two collections by David Colmer will be published in February 2020 by Bloodaxe Books.