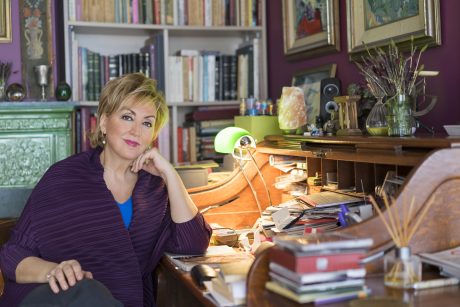 Dr. Gül Irepoglu is an architect, art historian ad novelist. After obtaining a degree in architecture from the Istanbul State Fine Arts Academy, she pursued an academic career in History of Art at the Istanbul University Faculty of Letters and received her professorship in art history. In addition to making TV programmes on culture, the arts and history, Irepoglu has also served as president of the Foundation for the Conservation of Turkey’s Monuments, Environment and Tourism Assets (TAÇ) and as the head of the Tangible Cultural Heritage Committee of the Turkish National Commision for UNESCO. Irepoglu has written several volumes on European and Ottoman art, portraits of the Ottoman sultans, the Tulip Period, the culture of the eighteenth century, the cult of the tulip, the cult of the rose, artistic relations between the East and the West, European and Ottoman jewellery and the concept and history of the turquoise.After26 years at the university she took early retirement in 2005 inorder to diversify her range of activities.

Her novels, mostly based on historical events and life in Istanbul and Topkapi Palace have been translated into fifteen languages. Her first novel, “ONTO THE TULIP GARDENS: MY SHADOW” describes relationships at Topkapi Palace and the Tulip Period. Her second novel “THE CONCUBINE” is about a love story in the harem at the Ottoman court in the 18thcentury. Her third novel, “ISTANBUL’S RIBBONED KALEIDOSCOPE” is an autobiographical novel hinged on clothes and covering İstanbul’s last 50 years. Her fourth novel “THE STAR OF ISTANBUL” is a fantasy based on true events about extraordinary people touched by an extraordinary diamond from the time of Suleyman the Magnificent until the present. Her fifth novel is about the Istanbul days of the eminent painter Aivazovsky; “A PASSION FOR THE SEA: THE SECRET DIARY OF IVAN KONSTANTINOVICH AIVAZOVSKY”. Her last novel “REUNITED” tells the secret love story of two famous musicians in the intellectual entourage of Istanbul of the fifties.“The Tree” in the short story collection “İstanbul: In Women’s Short Stories” (2008) is about an old İstanbul neighbourhood; the short storycollection “Snow Covered the Tracks”(2012) includes“Julia’s New Year in İstanbul”; about an imaginary romance involving Julia Pardoe, known for hermemoirs from her visit to İstanbul in the early 19th century.