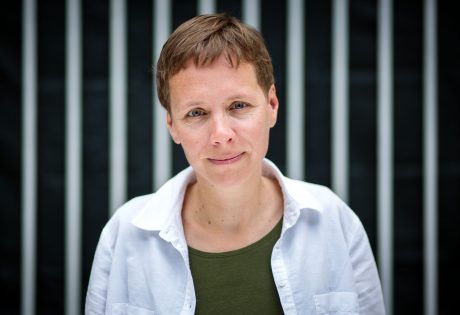 Jana Beňová was born in Bratislava (Slovak Republic) in 1974. She studied at the Academy of Music and Dramatic Arts in Bratislava, graduating with a degree in dramaturgy in 1998. She wrote for a number of local publications, including Dotyky, Fragment andSlovenské Pohľady. She also worked for the daily newspaper SME under a pseudonym. In 2012, she participated in the International Writing Program’s Fall Residency at the University of Iowa in Iowa City, IA.

Her novel, Café Hyena (Plán odprevádzania) won the 2012 European Union Prize for Literature and as thus far it has been translated in to 12 languages including German, English, French, Italian, and Arabic. She is the author of three books of poetry and four novels.

Beňová worked as a journalist and editor at the Theatre Institute and currently she is publishing inthe independent newspaper “N”.