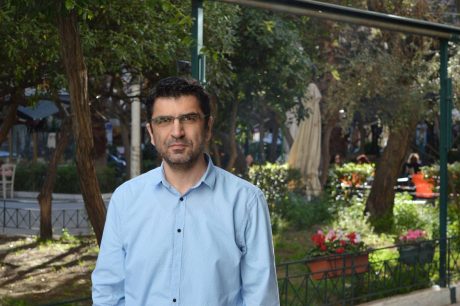 Makis Tsitaswas born in Giannitsa in 1971. He majored in journalism and worked for several radio stations in Thessaloniki. Since 1994 he has lived in Athens where he works in publishing. He has served as senior editor for the literary magazine Periplous (1994-2005), and was the co-publisher and director of the book journal Index (2006-2011). From 2012 to the present he has been directing Diastixo.gr, a website on books and culture.

He is a member of the Hellenic Authors’ Society.

His literary works have been included in anthologies, published in magazines and newspapers, and translated into German, French, Spanish, English, Hebrew, Albanian, Bulgarian, Polish, Swedish, Finnish, and Italian.

His lyrics have been set to music by Giorgos Stavrianos, Takis Soukas, and Tatiana Zografou

He has published 23 books for children and 4 for adults.

His novel God Is My Witness, earned him the 2014 European Union Prize for Literature and honors by the Municipalities of Athens, Pella, and Edessa, the Central Public Library of Edessa, as well as the Region of Central Macedonia.

God Is My Witness is available in 12 European languages.