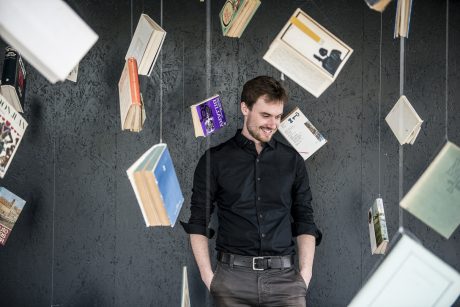 Marek Šindelka is a poet and novelist.  Born in 1984 in the Bohemian town of Polička, Šindelka attended Charles University in Prague, majoring in Cultural Studies, and the film academy, FAMU, where he studied screenwriting.He made his debut with the volume of verse Strychnin (Strychnine) for which he was awarded the Jiří Orten Prize 2006. Two years later he published his first novel Chyba (Aberrant), a book that was well received by both critics and readers. Šindelka is one of the new upcoming authors in Czech literature and has already shown his ability as a writer. Together with the illustrator Vojtěch Mašek he turned his novel Aberrant into a graphic novel. It gave them the opportunity to present the story in another way and develop other lines in the story and thus presenting a new view. In 2011 he published a volume of short stories called Zůstaňte s námi (Stay Tuned), expressing a critical and ironic view on contemporary life. The book was awarded with the Litera Magnesia Prize 2012 and was nominated for the Josef Škvorecký Prize 2012. His last book is Mapa Anny (Map of Anna), a set of short stories that are interconnected with each other and digs deep into the personal feelings and lives of young people. The Dutch edition of Map of Anna was published in 2016 by the publishing house Das Magazin and met with tremendous response by both critics and readers. Late 2016 Šindelka published Únava materiálu (Material Fatigue), a controversial novel about refugees. A regular contributor on literature to newspapers and magazines, Šindelka lives in Prague. In 2018 he participated at writers residency in Scotland working on his new book.