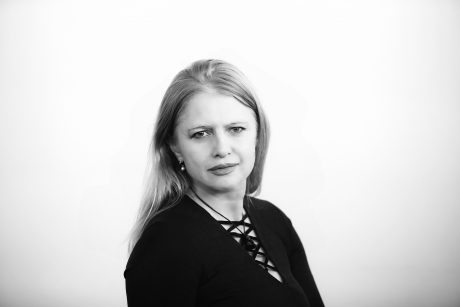 Mojca Kumerdej (1964) is an award-winning Slovenian writer and philosopher. She also works as a critic, covering dance, performance and inter-media arts. Her first novel, Baptism above Triglav (Krst nad Triglavom, 2001), was an ironic look at Slovenian cultural and literary traditions. Her two collections of short prose, Fragma (2003)and Dark Matter (Temna snov, 2011),show an utterly original world, one that derives from the inner corners of contemporary society. Her latest novel, The Harvest of Chronos (Kronosova žetev, 2016)is a picturesque portrait of the 16th century, which won her the Kritiško sito Awardfor best book of the year awarded by the Slovenian Literary Critics’ Association and the Prešeren Fund Award, Slovenia’s highest award for artistic achievement, and was also shortlisted for the Kresnik Awardfor best novel of the year. Her prose has been translated into over ten languages and included in various anthologies at home and abroad.