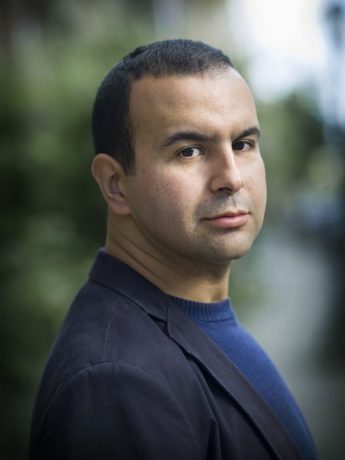 When Moustafa Stitou (Tetouan, Morocco, 1974) made his debut with Mijn Vormen (My Forms) in 1994, he was the first Dutch poet of Moroccan origin to publish a collection with a major publishing house. This might have helped a bit in raising extra attention to his work, as did the fact that he was only nineteen years old when he published it, but the most important reason for the sensation that Mijn Vormen caused, can merely be attributed to the unusual tone of voice the poet displayed in it, combined with highly original images and points of view.

His first English-language collection Two Half Faces (Deep Vellum, 2020, translated by David Colmer) consists of a collection of poems from across Stitou’s career. Stitou brilliantly parlays his relationship with his two homelands into a chronicle of identity, producing a vital account of cultural friction in poems that range from narrative to lyrical. Humor and seriousness go hand in hand, and the everyday combines with the surreal and the sublime to form a vibrant tension. This collection charts Stitou’s progress as a poet of emotion and intellect, one who poignantly illuminates the ambiguities of cultural identities, and the intersections of our inner and outer worlds.