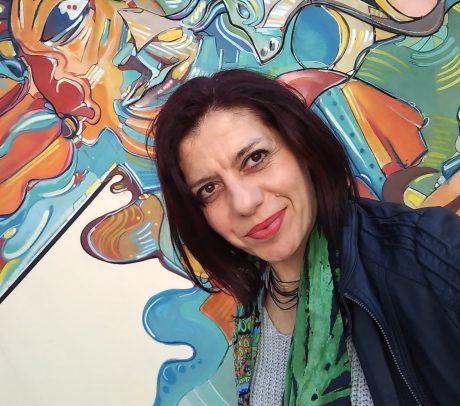 Nora Nadjarian was born in Limassol, Cyprus, and studied at the University of Manchester. She is an award-winning poet and author of short fiction. She has been cited or published in the Guardian, the Irish Times and the Telegraph and has also won prizes and commendations in international competitions, including the Commonwealth Short Story Competition, the Binnacle International Ultra-Short Competition and the Seán Ó Faoláin Short Story Prize. She was writer in residence at Goga Publishing House (Slovenia) and a speaker and workshop faciilitator at the Flash Fiction Festival in Bristol, 2019. She presented her latest work at Literarisches Colloquium (Berlin) in July 2019. Her story “Unification” (a surreal story on an imagined reunification of Cyprus), written on the occasion of the 30th anniversary of the fall of the Berlin Wall, was translated into German and published in Der Tagesspiegel. She was selected to represent Cyprus in the Hay Festival’s Europa28: Visions for the Future in 2020.

Her work deals with the themes of women, refugees, identity, exile, love and loss, as well as the political situation in Cyprus. Best known in Cyprus for her book of short stories  Ledra Street (2006), she has had poetry and short fiction published internationally. Her work was included, among others, in A River of Stories, an anthology of tales and poems from across the Commonwealth, illustrated by Jan Pieńkowski, Best European Fiction 2011 (Dalkey Archive Press), Being Human (Bloodaxe Books, 2011), Capitals (Bloomsbury, 2017), The Stony Thursday Book (Ireland, 2018), Shipwrecked (Sampson Low, 2019) and Europa 28: Writing by Women on the Future of Europe (Comma Press, 2020).