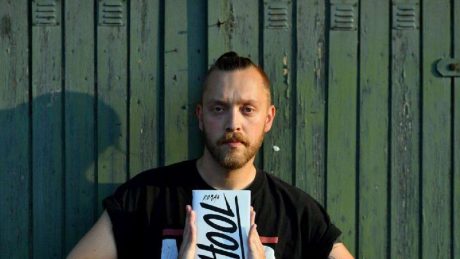 Winkler grew up in Hagenburg near Hanover. He studied creative writing and cultural journalism until 2012, then literary writing at the University of Hildesheim.

He gained attention as a writer in 2008, with the short story Summer Days in Beirut, which he submitted for the competition of the Joseph Heinrich Colbin Prize for “Orient in the Occident in the Orient”. The text took first place in the literary prize for the first time awarded by the online magazine Einseitig and the network of free cultural journalists (NfK). In 2012, Winkler was a participant in the Festival of Young Literature juLi in June, in whose anniversary volume an excerpt of summer days in Beirut or Beirut was seen and recorded. He has published several works in literary magazines and anthologies, including the short story Honkie in the Bella triste (2014). Winkler also wrote film reviews for the film magazine player.

In 2015, Winkler received a scholarship from the “Workshop for Young Literature” in Graz, where he won the Retzhof Prize of the Literaturhaus Graz for excerpts from his debut novel Hool. Hool plays in the Hanoverian hooligan scene to the football club Hannover 96, and puts the young first-person narrator Heiko Kolbe in the center. Winkler had published in connection with the riots during the 2016 European Football Championship in France under the title Insight into the combat zone behind the door in the Frankfurter Allgemeine Zeitung.

Hool was praised by the critics even before its publication and reached the shortlist of the German Book Prize. Thomas Klupp rated the work as such a “hard-hitting, deeply sad and deathly debut novel”. as it had been seen since Clemens Meyers’s When we dreamed. Moritz Rinke praised Winkler’s novelist as “moving, powerful and with a keen sense for the world of outsiders”, while Andreas Platthaus (Frankfurter Allgemeine Zeitung) included the work in his selection of the “most beautiful novels of autumn”. Platthaus rated Hool as an “uncompromising novel” that was “even more than a ghostly intense insight into an otherwise hermetically sealed world” but also “the sociogram of a young adult who has nothing but violence”.

Philipp Winkler lives as a freelance author in Leipzig. He completed stays abroad in Kosovo, Albania, Serbia and Japan.