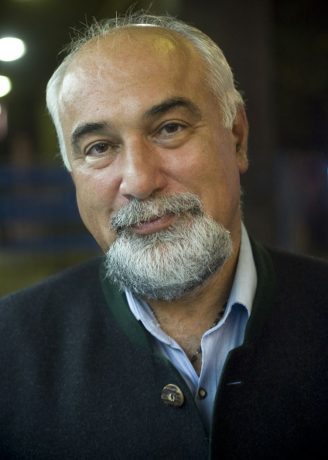 Varujan Vosganian born in Craiova on 25 July 1958. He is a graduate of the Faculty of Commerce of the Academy of Economic Studies and of the Faculty of Mathematics of Bucharest University. He is a Doctor of Economics, a founder of the Romanian Society for Economics, an International Adviser to the European Union’s Centre for Political Studies, based in Brussels, and a member of the Young Politicians Club (London). He is the Senator for Jassy and between 2006 and 2008 he was Minister of Finance and the Economy. He is President of the Union of Armenians in Romania and Vice President of the Romanian Writers’ Union. Besides various theoretical works, mainly on economic subjects, he has published three volumes of poetry – Şamanul albastru (The Blue Shaman) (1994), Ochiul alb al reginei (The White Eye of the Queen) (2001), Iisus cu o mie de braţe (Jesus with a Thousand Arms) (2004) and  Cartea poemelor mele nescrise (The Book of my Unwritten Poems) (2015); two novels – Cartea şoaptelor (The Book of Whispers) (2009, 2012) and Copiii războiului (The Children of War) (2016), as well as two volumes of short stories – Statuia Comandorului (The Statue of Commander) (1994), awarded the Prize of the Bucharest Writers’ Association, and Jocul celor o sută de frunze şi alte povestiri (The Game of Hundred Leaves and Other Stories) (2013). Varujan Vosganian has written more than five hundred articles, studies and essays on economics, politics, and literature, which have been translated into English, Spanish, Russian, Ukrainian, and Armenian. His novel, The Book of Whispers, was greeted as a revelation by the Romanian critics and brought him international acclaim and a Nobel Prize nomination. It has earned extensive praise and is already regarded as one of the most important books of contemporary Romanian literature.